Topps is taking Strata to a higher end configuration with only 2 cards per box, both hits, one auto and one relic.  Surprisingly the Brewers do have cards in this product.  Mostly Braun, but Robin Yount also gets a couple new cards.  Images to come after release.

Posted by cynicalbuddha at 10:41 AM No comments:


I guess I should feel lucky that Topps decided to include any Brewer at all in this set and of course it's mostly Braun.


Posted by cynicalbuddha at 10:28 AM No comments:

I know I've pretty much relegated this blog to just posting checklists and that's probably because starting seven blogs was a bad idea, but it comes in useful for collecting things like checklists and example images for those sets.  That being said I can't promise that will change much in the future, but one of my New Year's collecting goals is going to be focusing on certified autos for the collection.  As many autos as I can find for as many players that have played for the Brew Crew. Believe it or not that won't be too hard or too expensive.  I was looking on COMC and refined my search for only Brewers autographed cards and started from the cheapest priced ones. There are over 200 autographed cards under $2 each.  And I keep saying you can't find deals there anymore!!

Enough about that how about we show the newest auto to the collection.  This bad boy came way of eBay, but still was only a dollar plus shipping.  Contenders is one of those sets I really overlooked because it featured mainly college prospect in their college uniforms.  But there are a few Brewers, err excuse me, Milwaukee cards in the set.

Tyrone Tayler is currently the #2 prospect in the Brewers system.  Here an what an article from earlier this year had to say about Tyrone, from MiLB.com

Before Arcia ascended to the top of Milwaukee's prospect rankings, Taylor was No. 1. He's only slipped to No. 2, and there are many who would still argue that his future is the brightest in the system. Much of that optimism is due to the 2012 second-round pick's exceptional defensive tools. On the 20-80 scale, Taylor possesses 60 speed (above average), 55 fielding ability and a 50 arm.
"He's a solid center fielder, another guy who can go get 'em," Nichols said. "He put up solid numbers last year. He's a good baserunner. I like Tyrone.
"He's a good outfielder. He's going to get better, too. He's working on getting better breaks, and he's good already, but he's going to be better."
What's more, Taylor -- a former high school running back -- is a more-than-adequate hitter. Over 130 games in the Class A Advanced Florida State League last year, he batted .278/.331/.396 with six homers, 68 RBIs and 22 steals in 28 tries. He led the circuit with 36 doubles while ranking second with 141 total hits, and he hit for the cycle in April.

Tyrone didn't make the big show in 2015, but with all the moves the Brewers are making this off season there is a chance he might move up quicker than I think, or get traded away.  And I'll probably have to try Tyrone at Spring Training for a TTM if he's still with the team. 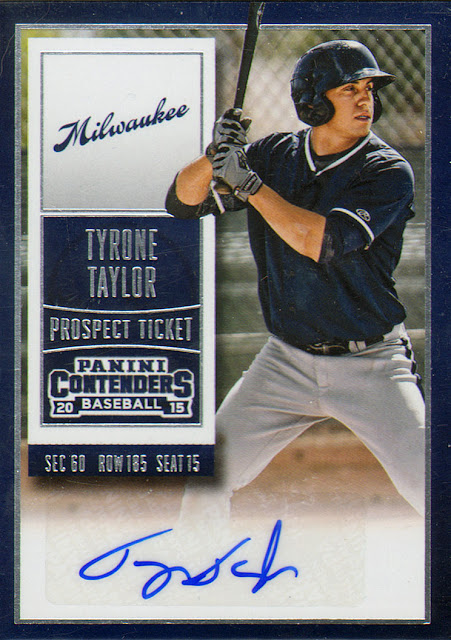 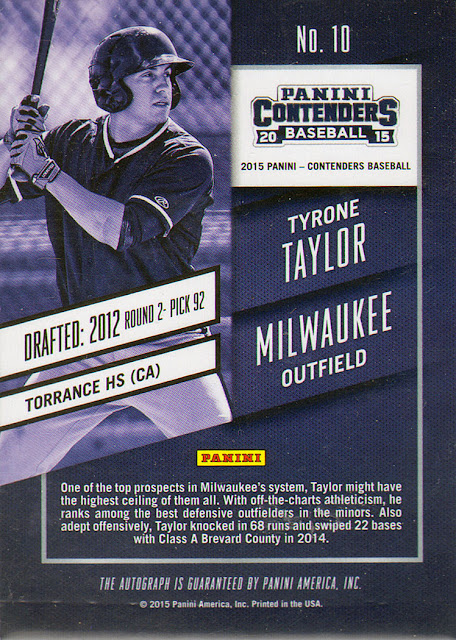 Posted by cynicalbuddha at 1:26 PM No comments:

I'll be adding images and updating print runs when the set gets released later this week. 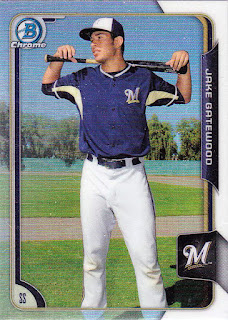 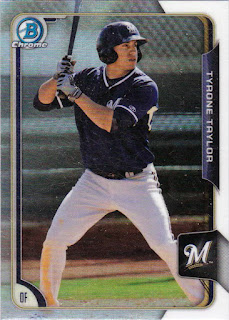 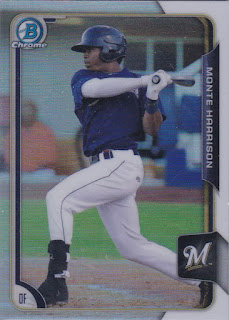 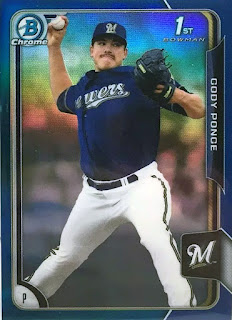 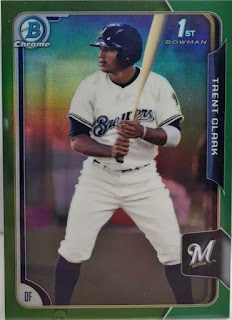 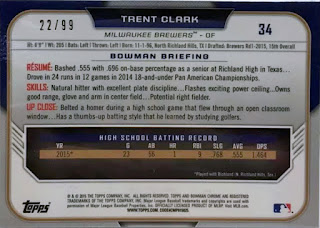 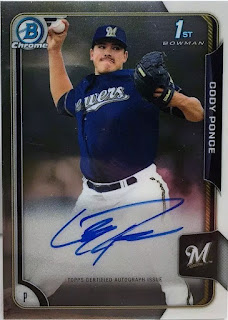 Posted by cynicalbuddha at 11:24 AM No comments:

One of my goals as a Brewers collector is to try and collect as many different certified autos as I can. And luckily as a Brewers fan that goal isn't that expensive.

I wish I could remember where I picked this up.  Most likely I bought it off of eBay after Rickie left the team, but it's also possible I received this in a trade. 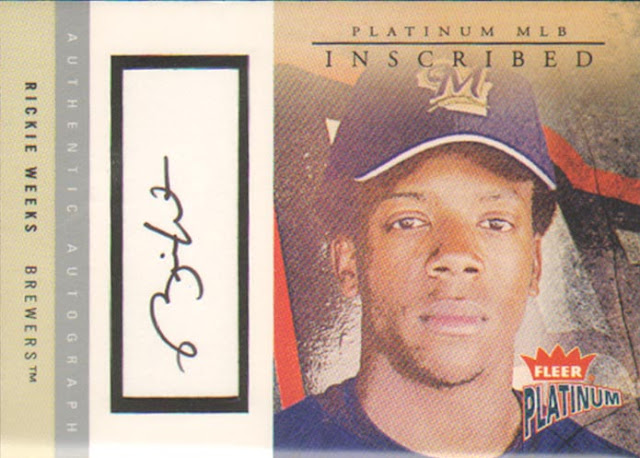 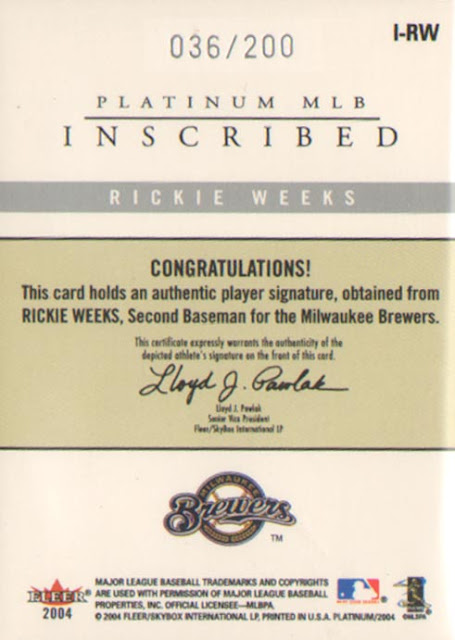 Posted by cynicalbuddha at 9:34 AM No comments: