I was pleasantly surprised to see that Ryan Braun signed a 5 year, $105 million, extension to put him in a Milwaukee uniform till 2020.   After reading the article it made me make up my mind and decide to add Ryan Braun to the list of Players I actively collect. Sure I already collect Brauns cards as a matter of course being a Brewers fan and collection Brewers team sets and cards, but now it's official and he might even get his own album and box.  Such an honor has only been bestowed to a few greats.  My 3 HOF Player collections, Rollie Fingers, Robin Yount, and Reggie Jackson, my other two favorite baseball players growing up, Frank Thomas and Bo Jackson, my only "current" football player, Brett Favre, and I'm probably soon going to announce that Jordy Nelson and Aaron Rodgers get the official nod too, although Rodgers cards are currently hella expensive.  I had been toying with adding Prince Fielder to that list but seeing as he probably will be with another team next year I'm holding off. 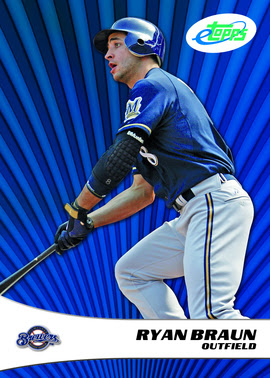 So welcome Ryan to Cynicalbuddha's hallowed halls of collectingdom!  I'm hoping that this card will be the next in my collection as well.
Posted by cynicalbuddha at 1:04 PM No comments: