Hot damn finally some interesting if not good news for the Brewers. 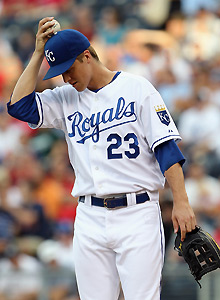 So I was just reading that Zack Greinke is coming to Milwaukee.  Finally the Crew is addressing the abortion that is the Milwaukee bullpen.  Don't get me wrong there are a few bright spots in there but come on.
In the deal we ended up getting rid of Alcides Escobar and Lorenzo Cain and a couple pitchers for Greinke and Yuniesky Betancourt.  So we get a shortstop for a shortstop and a pitcher for an outfielder and 2 pitchers.  And while that seems lop sided I think this was actually a good trade for the Brew Crew.  And Zack didn't have a great year last year going 10-14 with and ERA of 4.17, but 2 years prior he had a winning record and an ERA around or under 3.00.  and in 2009 he went 16-8.   He's no Cliff Lee or CC but after watching a great offensive team get its ass handed to them more often then not due to pitching it's a promising sign.
Posted by cynicalbuddha at 9:22 AM